The AC isn't working,  and it is so hot the computers are complaining.  It's hot enough to die- and too hot to dye, or to make stitch markers.

This month's sock blank club will be running at least one, and maybe two weeks late getting out.  The good news is that  I'm finally getting the knitting machine I wanted, and I'll be able to whip out and dye the October blanks at the same time.  I can't wait- they're going to be fun!

This month's themes are back to school, and harvest. 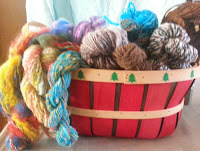 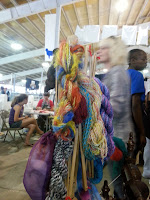 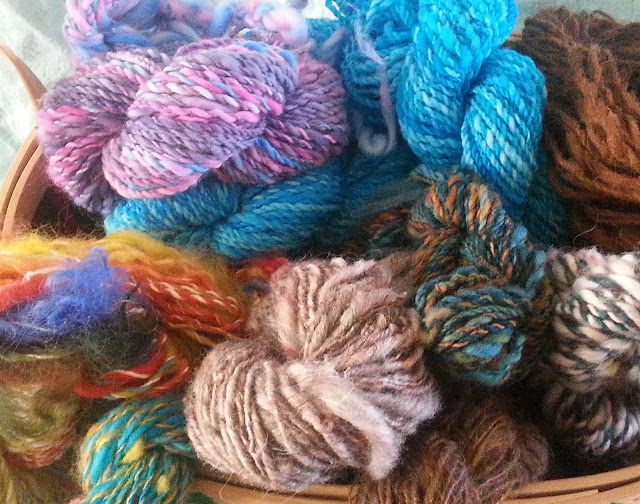 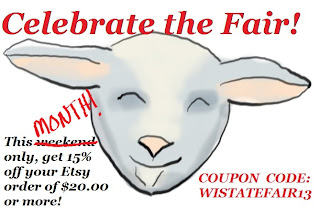 Only had four comments on the blog, so everybody wins!  If you are local to the Milwaukee area, you can pick up your yarn for me this Thursday at Milwaukee String Theory meeting at the Collectivo , on Humbolt just north of Locust. If you are not local to Milwaukee, please e-mail me at: Char at luvinewe.com and we'll arrange shipping options .

If there's anything you're looking for from the Etsy shop, as a 15% off coupon until the end of the month, and winners of this contest will ship free, even if I have to refund the money to your paypal account.

State fair is over until next year.  I had an awesome time spinning and teaching, and even learned some new tricks for my spinning repertoire!  The yarn that looks like someone sheared a clown is my very first core spun mohair yarn!  I love it- it's going to make an awesome accent on a hat or some mittens!  I was really prolific today, finished about four skeins bringing the total for the run of the fair up to 12!

I'll be giving away half of that- one skein each to six people who comment on yesterday's blog post before 1 AM tonight!

I'm looking forward to seein g some of you at Milwaukee String Theory on Thursday evening.  If you win yarn, you can pick it up there.

Back to the State Fair

Today was a grand day at the fair!  Lots of interest in the wheel , and two children even asked, un prompted by parents, if they could try making yarn!

Passed out a  lot of flyers for Milwaukee String theory, hopefully some of those folks will actually show up one of these Thursdays.

Made a lot of yarn today.  Finished plying the Finn with some of the blue, and finished another bobbin full of the raspberry blue roving I got from Ogle Designs last week.  As promised, Some of the skeins made at the fair this year will be given away tomorrow evening!

Comment on this post between now and  1 am Monday August 12, and tell me what your favorite thing about going to the fair is, and you will be in the running for one of six skeins to be given away.  Winners will be posted and contacted for pick up or shipping information on Monday .  Pictures of the yarn will be posted tomorrow, but only comments on THIS POST will get you a chance at a skein of yarn!  One entry per person, please!

I'll be back at Wisconsin Wool Works in the Sheep barn again tomorrow, spinning from 9-3.  Come see me!

The view from my wheel 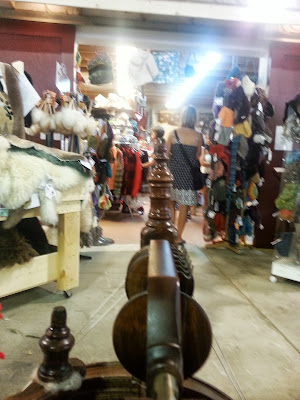 This weekend was one of the most productive spinning weekends I've had in months.  I spent it at the Wisconsin Wool Works booth at the State Fair, in the Sheep Barn! I spun for 6 or so hours each day, and finished three small skeins of plied yarn.

I also got to talk to hundreds of people who were interested in sheep, knitting, and especially the spinning wheel.  I had one engineer asked to take my wheel apart so that he could finish building electric spinner for his sister, I had one little boy between two and three years old watch me for about 5 minutes really intently, and then explain to his mommy that it works just like his bicycle.  Including explaining how gears work.  His mom's in trouble when he grows up, I don't envy her trying to keep him from getting bored in public school.

Interestingly, there were more boys interested in the spinning wheel than girls. And more adult men than women.  Maybe it's because its machinery?

In any case, I talked myself hoarse both days.  I really want to thank CKay and Michael for getting up early and helping me get to the fair on Sunday, because having the car there made it possible to bring the spinning wheel home.  They even went and got the car for me so that I could do that.

Luvin' Ewe
Hi, I'm Char. I'm a WAH mom to two teenagers, a loving Australian Shepherd dog, and Wife to the most patient, supportive man in the world.